I have Twitter CEO Dick Costolo to thank for a new analogy to debunk pundit thinking on mobile advertising.

Yesterday in Barcelona, Dick gave a great speech at the annual Mobile World Congress.  You can watch his 30 minute speech online, where “registration” (for spam collection) is required but it is free.

Dick said that calling Twitter a microblogging service misses its transformative impact. Like calling an automobile a “horseless carriage”.

I have been going to Mobile World Congress since 2005 when I was living in Australia and working for LBS start-up Seeker Wireless.

I missed 2010 and this year but may be back there in 2012. From personal experience, I can report It is always a hyperbole of activity for 4 days at the Fira de Barcelona with over 50,000 from the mobile industry in the one place. Photo credit: @ilicco via Flickr

However as each year rolls on, the mobile advertising revenue figures and take-up keeps being revised – down. So why is this? 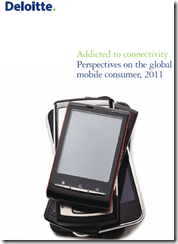 Looking at a just published report by Deloitte titled “Addicted to connectivity. Perspectives on the global mobile consumer, 2011”, some clues are contained in here.

Before I share some of the results, I have my own updated hypothesis as to why mobile advertising has not taken off.

Currently we are focusing on the consumer’s main screen – ie their mobile handset. Instead we should be focusing our efforts on the second screen (their iPad, Samsung Galaxy, Motorola Xoom, Dell streak etc).

The reason for my view is that 4 years of hype has proven that consumers do NOT want intrusive mobile advertising.  You can slice and dice the figures any way you want, saying that they will tolerate advertising etc if given a benefit, but the results are very telling in western markets that mobile advertising still has a long way to go.

Let’s look at TV.  We tolerate (even enjoy) TV advertising because it is not our “main screen”.  We sit down to watch TV, knowing that we will see ads on most channels (even the BBC has station promotions in between programs) as a by-product of the medium.

It is expected because TV is not a primary communication tool – it is used to consume media.

When we place advertising on a small, primary screen, we interrupt the main utility of the device – that is to communicate, send and receive texts and emails and browse the web on the move.

The mobile experience is personal and very different

At a recent workshop with a large retail bank, we got talking about mobile.  I had the group of 18 executives look at the mobile internet in a very different way.

I printed standard websites (BBC, high street banks, shopping websites) out on A3 pieces of paper, and had teams from the group literally cut up the A3 pages and paste them together to form their view of what the mobile version of the particular website should look like.

This was an amazing sight to watch, because it made everyone really think about what information you would need on a mobile website. It also forced them to think about how mobile sites must look and perform differently to the PC versions.

I practice what I preach so if you visit either my personal website andrewgrill.com or this one londoncalling.co on a mobile device you will get a different, mobile optimised experience.

If you have an iPad, visit this site and you will see an iPad optimised site that looks great thanks to the WPTouch plug-in from Brave new code.

We must treat mobile (and especially the main screen) differently, and not just shoehorn the web banner ad model onto mobile.

Even Apple’s very high profile iAd concept is running into trouble in the US according to TechCrunch.  The initial $1M mobile campaigns on the Apple platform have completed and booking the next $1M campaigns seem to be more difficult.

I mused how this may also happen in the UK given the per-campaign fee was set at an eye watering £600,000 starting price.

So – my one piece of advice for the entire advertising industry – don’t mess with the main screen, and the consumer may let you onto their second screen – this is where the money may lie.

The Deloitte report covers more than just mobile advertising, and looks at how addicted we have become to being always connected.

Their section on mobile advertising has some interesting statistics. 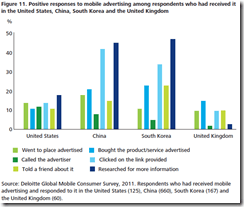 Figures from the report show that in the UK there have been fewer positive responses and direct actions to mobile advertising, than in the US and other Asian markets. 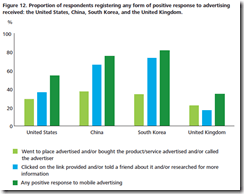 “Deloitte’s view is that over time, mobile advertising should become an increasingly powerful medium. But for this to happen, mobile’s strengths and limitations as an advertising medium need to be respected.

In summary, we need treat the consumer’s primary screen as sacred, and don’t interrupt the utility.

Leverage the second screen (tablet etc) with contextual and relevant advertising and this will allow existing creative and messaging to flow from traditional channels onto newer digital formats designed for rich creative content, and relevant and entertaining ads.