I’m delighted to see Google launch their Latitude product, as I have been saying for some time privately as well as during my numerous presentations on location and location advertising that this would be the next step for Google mobile maps (GMM).

As Google have the monopoly on worldwide automated location determination (via their GMM application and massive and ever expanding cell-ID database), the next obvious step is to allow trusted friends and family to see where you are and share your location.

In a nutshell, Google Latitude allows people using GMM to share their location with other trusted friends. 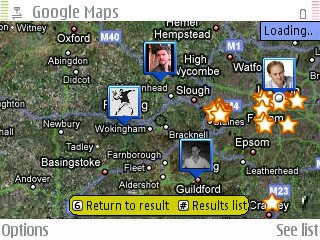 I have been using it for the past day and it works well – I have received numerous invitations (via twitter) to join my Latitude group and I’m also going to use it with the team heading to Mobile World Congress to keep up to date on where people are (with permission of course).  If you are going to MWC in Barcelona, DM me on twitter @andrewgrill or send me an email via my contact form with your Gmail address and I will add you to my Latitude list.

Shown above is the map view with photos indicating the location of my trusted friends.

See the video below by the Google team explaining how it works.

I’m one of the biggest GMM fans – the fact I can take out my mobile in almost any city in the world, hit the 0 key on my handset and within seconds get a location fix (either by GPS or the cell-ID database) of my location is very cool.

The ability to now share this is amazing.  Recently I have been testing a number of location clients and services including Locatik, Blogloc, Fire Eagle, Mapmytracks, Puskaradio and Nokia Maps, many of which facilitate location sharing.

I’ve had the ability to send my current location to a map for some time, but with this new service, I can use the same application I use for mapping (GMM) to share my location – brilliant!

What I’d like to see from the next release of Latitude is the ability to push a tinyurl to twitter to be able to publish my current location with a tweet – but I think that Google’s view on privacy would probably prevent this because for those with a public twitter stream (mine is protected) their location would be broadcast all over the web.

I’d also like to see an option to push my current location to Fire Eagle – let’s see if Google will allow this soon.  This feature would then allow me to choose who I share my location with – but as Fire Eagle is a Yahoo! initiative….we will have to wait and see if this will happen.

Nokia has a similar service called Friend View (from their beta labs) but this is a separate application – perhaps they will eventually build this into Nokia maps.  Nokia also have a massive cell-ID database so this is technically possible.  I’d be surprised if this was not in their Ovi roadmap for sometime soon.

I am regularly being asked for my opinion on location based services and extension services such as advertising.  Only last week I had a briefing with a well known US think tank who wanted to know about the possible commercial success of a “push” based SMS service based on a subscriber’s location.

This is also known as the “Starbucks example” and as many people know who have seen me present at conferences on location and advertising, I demolish this example in one slide.  Simply it won’t happen for a number of reasons, the least being that Starbucks are everywhere (except in Australia).

When speaking to advertising agencies and brands (and over the last 6 months I have spoken to around 50), only ONE has ever mentioned location.  It was asked in the context of “why has location advertising not taken off yet?”.  The other 49, NEVER asked about location – it is simply not on the (advertising) agenda.  Perhaps with the emergence of these location sharing applications, we will finally see LBS become an accepted enabler by the general public.

One of the closest services to Latitude is Palringo and it is worth checking out. Go to m.palringo.com on your handset.  They have a cool voice IM client that is also location enabled.  I’ve been speaking with their CEO Kerry Ritz recently and Palringo comes into its own around social networking – an area that latitude falls down on. With Palringo you can not only see where your friends are (as you can with latitude) but you can see their presence info – on a call etc as well as chat with them via voice or text – in real time.

Both Palringo and Latitude will help to promote the concept of location as a cool feature to the masses.  Location information and sharing needs to be both easy and automatic to succeed with a mass market.

To test out Latitude you need to be using the latest version (3.0 for Symbian) of Google mobile maps.  Sadly, I am hearing reports via twitter that the iPhone and G1 android phones do not support Latitude, but I am sure this will be available on these platforms very soon.

I think we will hear a lot about Latitude in the coming months.