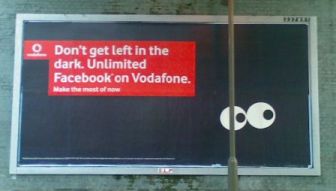 Speaking from personal experience, I can say that flat rate data plans DO drive consumer behaviour.  For some time I have been on a Vodafone UK business plan, that gives me a gazillion minutes, free landline calls in the UK BUT only 20MB of data included with a £15/month add-on plan.  This severe limitation made me vary careful about what I use my handset for.  After a month’s worth of push emails, and a bit of browsing (text only option on Opera mobile – no pictures), I was coming close to the 20MB limit each month.

This forced me to use a pre-paid SIM subscription on Vodafone for serious web browsing Google Maps usage and mobile application testing – but even with a pre-paid allowance of 15MB per day for £1, it still was not enough.

Recently I took out a pre-paid data subscription on the 3 network – this allows you 1GB of data for just £10 per month.  Bad news for Vodafone though is that I substituted my mobile data provider with a competitor because I wasn’t getting value for money for handset mobile internet.  As a footnote, I do have a data card and subscription from Vodafone, and I pay £15 for 3GB of data for my laptop – a much better deal but this is a data only plan and has no voice services.

On July 2nd, Vodafone finally revamped their business plans, with a new range of plans under the Vodafone Total Business banner.  Now I can take advantage of their “unlimited” (read 500MB fair usage) add-on for just £7.50/month – a much better deal.

This change of approach to data pricing has now meant that I am not afraid of bill shock when using my handset for mobile browsing, email, Google maps etc.

I’ll still keep the three 1GB/month pre-paid SIM active – in my 2nd test phone as it also has a generous allowance that I don’t need to worry about my usage any more.  On the Vodafone pre-paid SIM, if I use more than 1MB/day, I’ll be charged £1 – so effectively this is £30/month if I use it daily, compared to just £10/month for the 3 card.

So Vodafone keep me on one SIM card (on contract – with a higher ARPU so they will be happy about this), BUT they lose me on a pre-paid account.

The picture at the top of the post shows some recent outdoor advertising for Vodafone – promoting their unlimited plans by using Facebook mobile as an example.  This ad I saw in Putney on the weekend, and I saw several others, making me think this is part of a broad mobile internet campaign from big red.

When facebook ads appear from Vodafone in suburban London, you know the mobile internet is going mainstream.